I’ve always been one for trying out new operating systems, so when I heard news about the latest desktop-conversion effort from Jide I wanted to give it a try.

RemixOS is a proprietary offering based on the work of android-x86, which aims to bring the stock Android experience to commodity PCs. RemixOS adds on interface and convenience changes to make the operating system more usable on PC hardware. This includes UI changes such as multi-windows and a classic ‘desktop’.

The Alpha for PC was released this morning, and can be downloaded here. There was also a leaked version that landed a couple days earlier. If you’ve seen reviews online, most of them came from this. What follows are my impressions of the experience.

In my effort to trial this, I’ve downloaded a copy and flashed it to a USB drive. Jide helpfully includes a Windows application to flash the ISO to a USB device. The process is simpler on Linux:

After enabling legacy booting it was simply a matter of pressing F12 during the boot process and selecting my USB drive. 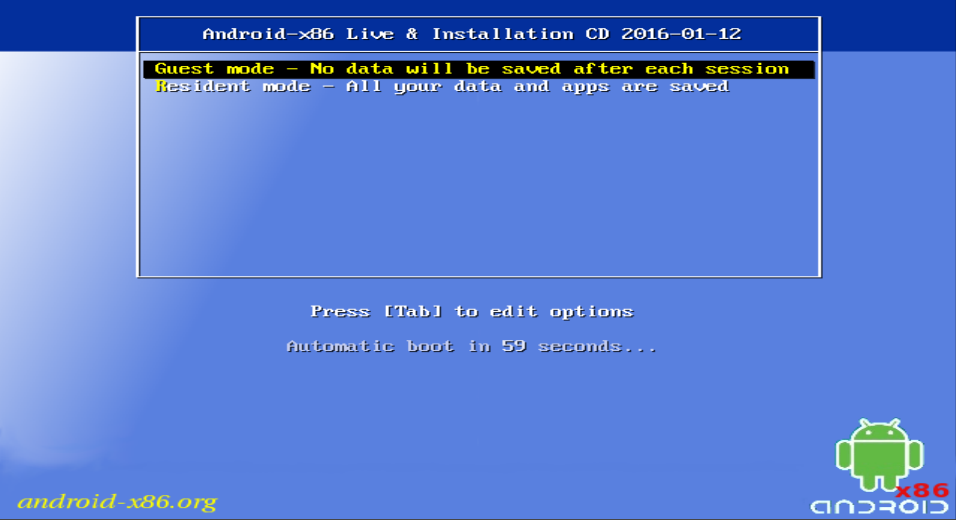 I was greeted by an old-school isolinux boot menu asking me to choose between ‘Guest mode’, which a la LiveCD will discard all of my saved information and settings upon reboot. The other option is ‘Resident mode’, which will save data, although I’m not sure what mechanism it uses yet. I’m afraid it might partition and format my internal drives. Some more testing with a VM is warranted.

After choosing Guest mode, the system changed to an equally old-school Linux loading boot framebuffer. I know this is an alpha, but I hope the boot experience is something that they eventually get right. I’d love the booting experience for this to be as fast and seamless as other modern operating systems. 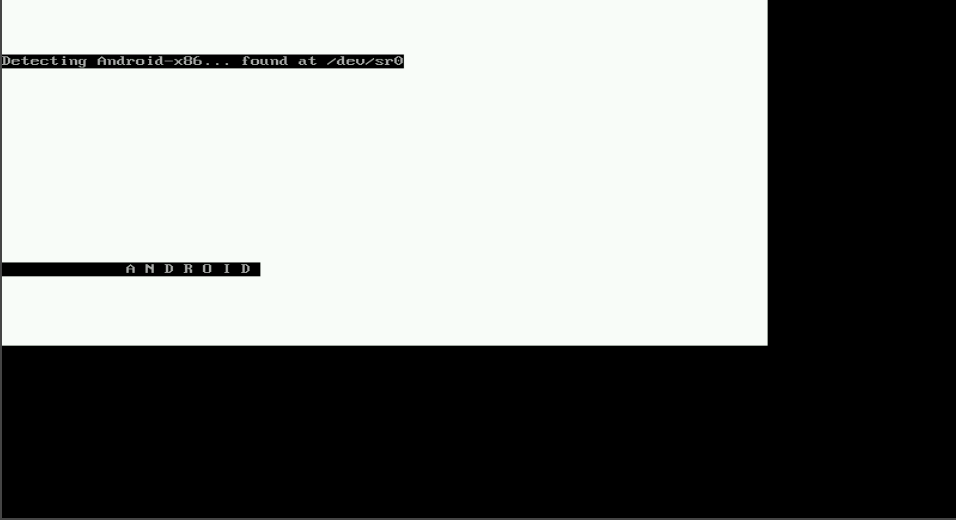 The system took about 30 seconds to boot, which is understandable because of USB. After I installed on an internal SSD I noticed the boot performance was equally bad. I’d love to get or make a Bootchart of why this is.

After watching a pulsing ‘RemixOS logo’ I was greeted with the welcome screen. All was well. My display worked at proper resolution. My keyboard and mouse both functioned as expected, albeit with an inverted scroll direction to the mouse. The important part was that everything worked.

The welcome screen asked me my locale and assisted me with WiFi setup for the first time. After a few clicks of ‘Next’ I was done. 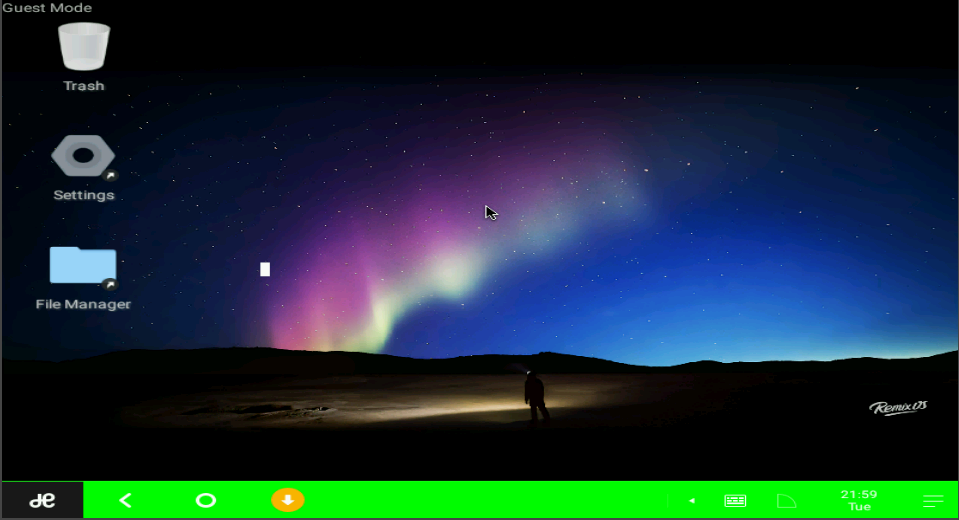 What greeted me afterwards was the RemixOS desktop. It has many of common features that one comes to expect such as a taskbar on the bottom, icons on a desktop, and a ‘start button’-esque app drawer.

The leaked pre-release copy contained the Google Play Store, which made installation of apps much easier. For the official release this has been removed, so another store must be used. I chose to use the open source-centric F-Droid store. Unfortunately upon opening it revealed that there were no available apps. I figure this is due to being an x86 host instead of the usual ARM architecture.

Overall the interface is very snappy, as it should be while running on a piece of modern hardware. Apps install very quickly, menus appear and disappear surprisingly fast, and switching between apps is instantaneous. During testing I encountered several times at which the system’s screen turned black and remained unresponsive for upwards of 5 seconds. This always coincided with times where I was either closing an app or switching focus to another. 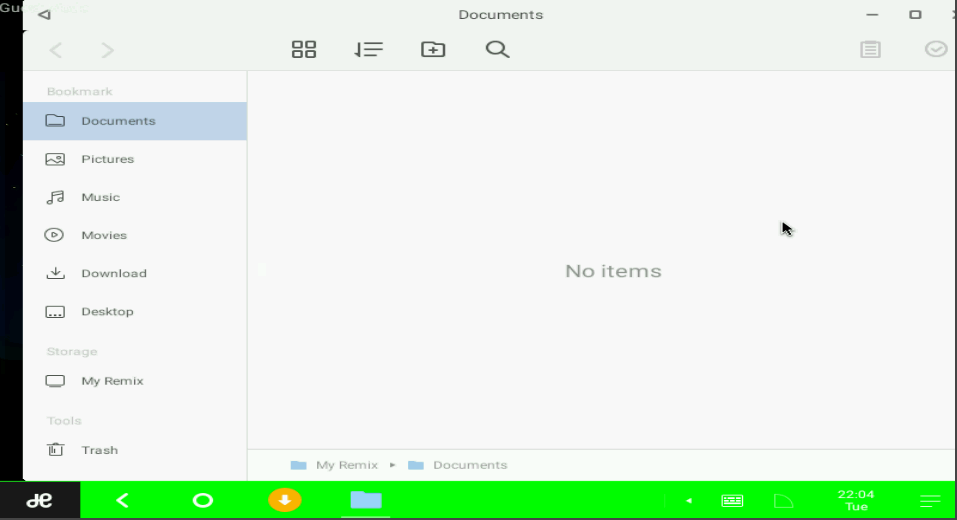 Some of the design elements are still designed for mobile. Things like some menus and dialog boxes are not as fast to navigate with a mouse or keyboard. Keyboard shortcuts are also lacking. For instance, ctrl+L will not select the URL bar in a web browser. There is no ‘Esc’ key. Instead, this is bound to Android’s ‘Back’ button. 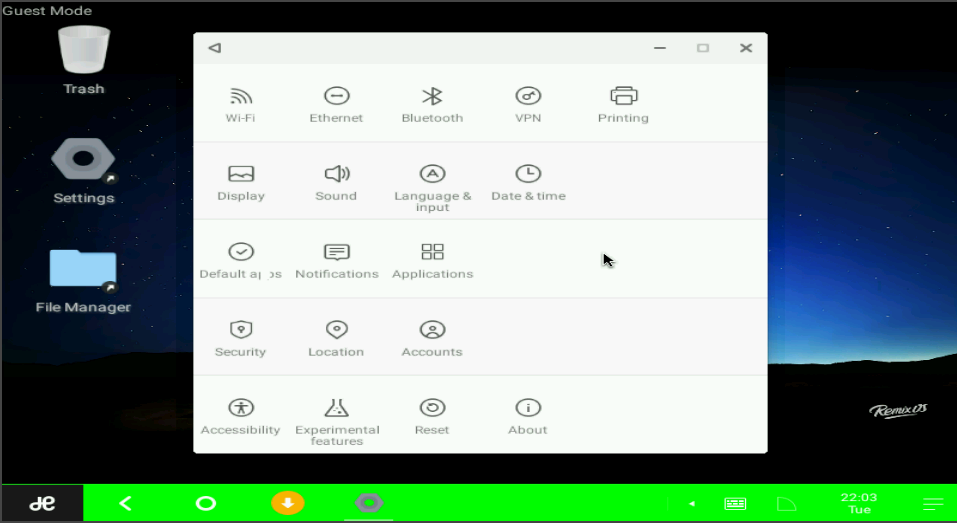 Browsers proved to be very frustrating. The stock browser would not respond to touchpad scrolling, but did respond to arrow keys. Likewise, Firefox did not respond to arrow keys, but did respond to touchpad scrolling. The overall performance of the browsers themselves were very good, but the input interaction did not have the same level of polish. Having used these browsers on mobile devices, I know this problem has to be with the RemixOS’s handling of my different input devices. 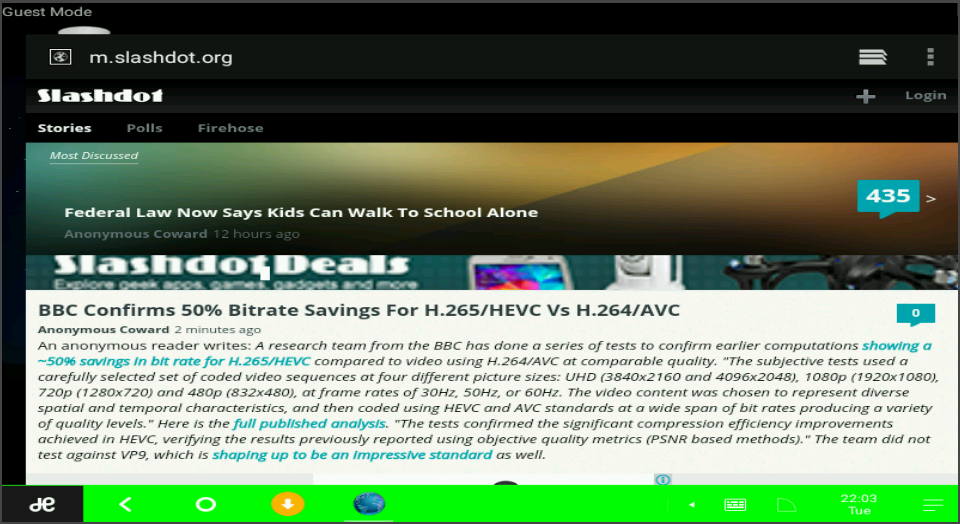 Viewing web sites has been a crapshoot as well, since many sites will automatically serve a mobile version when detecting the string ‘Android’ in the user agent. This results in some hilarious full-screen sized ads on a 14" monitor. Adaway would help, but unfortunately root is not included in this ROM. 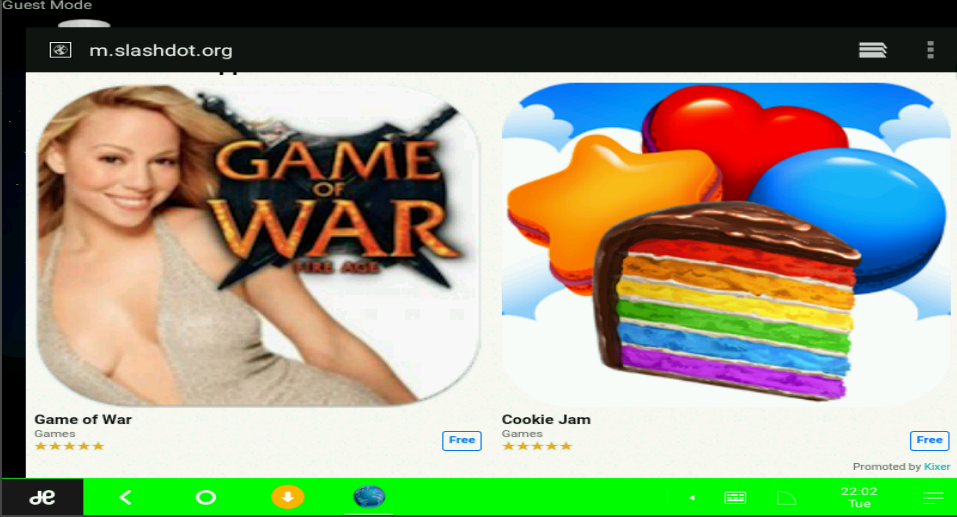 If I have some time later I would like to try rooting the system. I’m sad an obviously developer-oriented alpha doesn’t come with root, but it should be possible to add it myself.

The test machine for this is a Lenovo Thinkpad T450s, non-touchscreen 1080p model with 12GB RAM and a 120GB SSD. This is a fairly standard piece of Broadwell hardware, so should be representative of a modern laptop’s experience.

Let’s start with the pluses. WiFi, Brightness control, and volume control all worked out of the box. Hooray! S3 sleep worked out of the box, but is not triggered by a lid shut. Instead it must be selected by navigating to App Drawer -> Power -> Sleep. This is a minor annoyance. I wish this were open source so I could fix this myself.

I tested Bluetooth by pairing my laptop to my phone, then sent a picture from my phone to it. My laptop successfully received the picture and I was able to open it in a built-in photo viewer.

The battery of my ThinkPad is detected in the kernel logs, but Android is not showing a battery indicator, so I have no way of telling how much capacity is remaining. This is majorly frustrating, and something that I hope they work out in future revisions. The battery in the test laptop has standard ACPI interfaces, and should be easily detected and displayed by Android’s built-in support.

The touchpad has been infinitely frustrating. While it’s a standard Synaptics touchpad, it lacks the options of a regular OS, which can disable things such as tap-to-click. While typing the article under this environment my cursor jumped around considerably.

Over the few hours that I spent testing this, I get the impression that anybody attempting to live with this system in it’s current state is going to be frustrated by several problems. The problems that come to mind are the lack of battery status, maddening spurious tap-to-click events, and system lockup while switching apps. Again, this is an alpha and I’m sure most if not all of these problems will be fixed in a released version.

As for me, I’ve managed to partition my laptop’s second SSD, installed the system to that partition, and got it to boot. This will be featured in a future post. I look forward to attempting to root RemixOS, and improve it. I only wish that it was open source so I had an easier time improving it.